Closed for the Season
Our Medford Location Will Re-Open in 2023.
View Planned Operating Schedule

On October 16th, our Medford Location is closed for the rest of the year. Thanks for a great season and we'll see you in May!

What to Expect on the Water

From Medford’s Condon Shell you can paddle about 3.5 miles the Shannon Beach swimming and picnic area or head in the opposite directions toward the Blessing of the Bay Boathouse. Paddling Safety Information 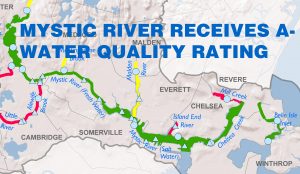 Also, here is current and historical data about the water temperature and flow for the river.

Where to Stop While Paddling

From the DCR’s Mystic River State Reservation:
Open year round, dawn to dusk. The banks of the Mystic River are almost entirely publicly owned, from the Amelia Earhart Dam at the mouth of the Mystic Lakes, making it one of the Commonwealth’s best protected streams. The river has been much altered since the 1800’s when its shores were largely salt marsh.
Draw Seven State Park
The Draw Number Seven Railroad Bridge, which once crossed the Mystic River, gave this park its name. Built in cooperation with the MBTA, this park provides much needed field game space for Somerville and adjacent communities. Draw Seven State Park offers 9 acres of parkland including two soccer fields, a bikeway/walkway, a picnic area with shelter and beautiful landscaping.

Mary O’Malley State Park
Acquired from the federal government after the closing of the historic Chelsea Naval Hospital, the park has striking views of the harbor and the Tobin Bridge over the Mystic River. A boat landing and shelter are located on an historic granite pier and a wind sculpture by William Wainwright enlivens the waterfront. Tennis courts and a large open lawn area for concerts and picnics are also available. The park is open year-round, dawn to dusk.

Mystic Lakes State Park
In 1893, when the Metropolitan Park System was established, large estates lined the shores of the Mystic Lakes. In part through generous gifts of land, the eastern became part of the park system. The western shores were never acquired and were subdivided into smaller house lots. Today the Mystic Lakes are popular for swimming and picnicking at Shannon Beach.

Torbert Macdonald State Park
Macdonald State Park honors a United States Congressman who served the district for 21 years. The park was built on a reclaimed dredge spoiled area left after the construction of Route 93. The award-winning landscape design of the meandering paths, trees and open lawns provides space for rest and enjoyment as well as bicycling, jogging, walking and informal games in a riverside setting.

Our Facility in Medford