We love to paddle and we love sharing that passion with you all. We hope that comes through here. 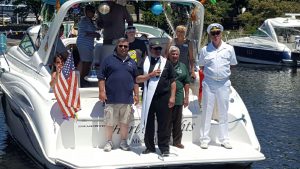 All Boaters are welcome to watch or to have their kayaks, canoes, or paddleboards blessed. Be a part of A tradition since the 1600’s to bring a season of safety and good fishing to our vessels! See photos from last year’s event.

History of the Blessing of the Bay

Historically, Shipbuilding in Massachusetts was one of the biggest and most important business in its early history. The first record of shipbuilding was in 1631 July 4, called the “Blessing of the Bay”.  It is the second ship ever built in English North America. All together, there were 568 ships built on the Mystic River.

John Winthrop, the first Governor of Massachusetts, arrived in America from England in 1630 and he was given 600 acres of land by the King that were located along the Mystic River in Charlestown (now Somerville).

He commissioned the building of “The Blessing of the Bay” which was pivotal for protection of Western Massachusetts communities from the Dutch and as well as for commerce. Trading and bartering of fish and fur with New Amsterdam in Manhatten and Cape Cod Communities became the first industry of New England.

On November 21, 1632, according to Perley’s History of Salem, Governor Winthrop and Captain Neal of Portsmouth, New Hampshire to use the Blessing of the Bay to try to apprehend the “Dread Pirate Dixie Bull” (they inevitably failed.)

This info is from the Somerville Times, Wikipedia, and the Mystic Wellington Yahcht Club, read more and let me know if you have your own research that you want to share!

We’re happy and honored to be a part of this tradition and be renting boats on the Mystic River at the Blessing of the Bay Boathouse. Come by anytime to check out a new stretch river in the Boston Area (accessible by the Orange Line T) and say hi!